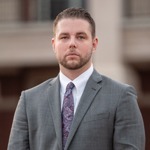 From the beginning, Mr. Winters was only interested in defending the criminally accused from the unforgiving government. He has focused his career on DUI Defense and Criminal Defense.

Directly after law school, Mr. Winters went to work for Houston County's Public Defenders Office where he defended over 300 misdemeanor cases from traffic citations to Domestic Violence charges to DUI's. Eventually he went on to work directly with the Georgia Public Defenders Council and defended over 100 felony cases all over north Georgia ranging from drug possession to murder.

Since joining the Law Offices of Richard Lawson in 2015, Mr. Winters has come to hone his jury trial skills even further with great success. He has returned “Not Guilty” verdicts in scenarios where normal attorneys would have never even attempted a jury trial. Furthermore, he regularly attends Criminal Defense seminars to keep his knowledge of scientific, case law, and law enforcement tactics up to date. Mr. Winters is experienced in felony drug possession, possession with intent to distribute, drug trafficking, burglary of all degrees, robbery, armed robbery, aggravated assault, aggravated battery, terroristic threats, aggravated stalking, child molestation, manslaughter, felony murder, malice murder, and probation violations to name a few.

When not practicing law, Mr. Winters is spending time with his wife and children in Gwinnett County.